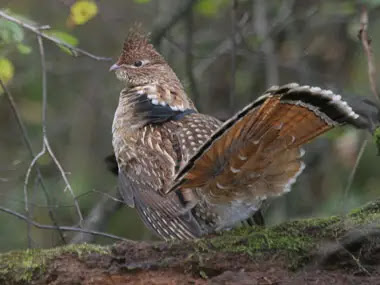 I live on Partridge Road, so named for the ruffed grouse (aka partridge) that live at the foot of the road. For years, when i meditated on my deck, i'd hear them drumming, sounding sort of like a distant motorcycle.

I haven't heard them for the past several years. Then, as i stopped at the mailboxes, a partridge flew low over my windshield, landing just 10 feet away. The partridge have returned to Partridge Road.

Several other neighbors have reported seeing the bird--it attacks their car, it follows them into their driveway. The one i saw seemed fearless and very curious.

I do know that foxes live just a few hundred feet away, and i've seen a fox jump up and grab one my neighbor's chickens in mid-air. So, even if the partridge isn't afraid, i am.

Fear assumes there is a future, and that something bad is going to happen.

What if we were like the partridge--fearless in the moment and curious?

Posted by Cheryl Wilfong at 7:38 AM