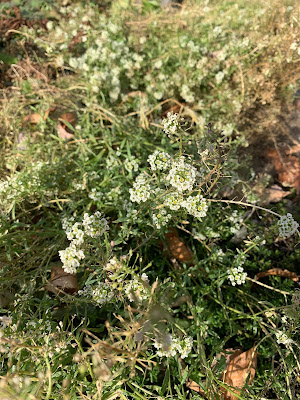 Alyssum is still blooming, but just barely. 23 degrees this morning, and alyssum's life energy is waning.

What a pleasure alyssum is. I sow the seeds along my walkways in mid-April. Alyssum is cold tolerant, so she isn't fazed by a cold snap here and there. She starts blooming June 1, and five months later, she's still full of charm.

But now, the week before Thanksgiving, her seeds are ready to be harvested.

I like a resilient plant, and i like resilient people. Resilience is the ability to endure the pain of a dart that someone throws, often unintentionally. Yes, that thoughtless remark hurts. Can you, I, we endure that pain with mindfulness? One second, five seconds? Maybe as long as a minute.

Then we notice we are breathing. Still breathing.

Posted by Cheryl Wilfong at 4:00 AM