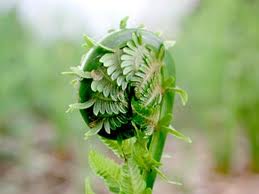 We are still eating fiddleheads here at my house and garden. I don't believe i've ever harvested fiddleheads this late in the spring. I used to think that fiddlehead season was the first week of May, but in recent years, it has moved to the last week of April with May 1 being absolutely too late to pick them.

This past April was cold, so the spring gardens got a slow start. Then i was away for 5 days, and when i returned the fiddleheads had unfurled their fronds into their full fernness. The fiddlehead that we eat is the sprout of the ostrich ferns; most other fern fiddleheads are unsuitable for eating. The ostrich fiddleheads taste like a combination of asparagus and spinach.

But my sweetie found one fern patch in the partial shade. The other ferns there were up and about, but the fiddleheads were just poking up. One or the other of us goes to that wild patch every day to harvest fiddleheads. This assures that we continue to find more young sprouts, even in mid-May.

Even when life offers us setbacks, our life energy keeps on going. There's no need to take the setbacks personally. Simply notice that things change and keep on changing. Even the fiddlehead ferns.

Posted by Cheryl Wilfong at 6:18 PM