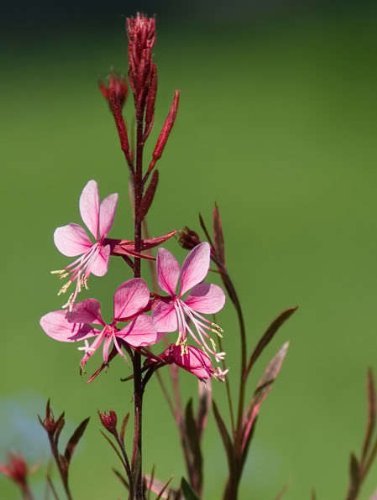 In June, i bought a gaura, also known as beeblossom. I love the gaura's little flowers on 2-foot tall stalks, which look like the flowers are dancing in mid-air.

This was the fourth or fifth gaura i had bought over the years. If i planted it directly into a flowerbed, i could already predict that that would be the last time i would see it.

So i put it in a "nursery" bed, near the back door, so i could keep an eye on it. To my surprise, it is now re-blooming. I like plants that bloom twice in one year!

When we are learning meditation, we may try it again and again, but it doesn't "take." But when we carefully attend to our meditation by taking a class, for instance, or by sitting regularly with other meditators, then our practice blooms. Or re-blooms.

Posted by Cheryl Wilfong at 9:09 AM