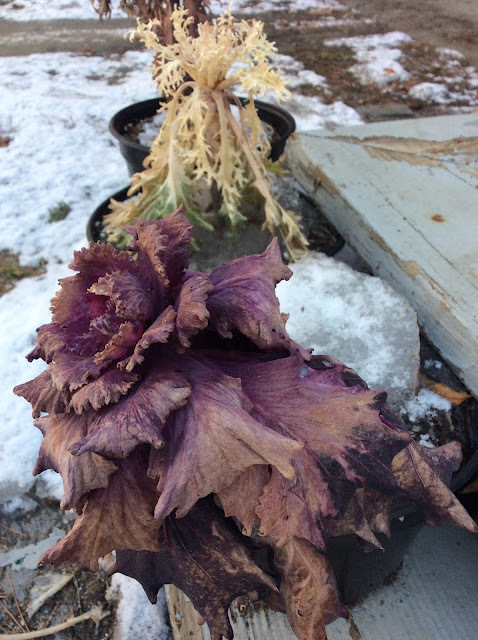 The flowering kale on the front step has had a long run. I bought them the day before Thanksgiving, and, due to our nearly snowless winter, they have looked pretty good for 2 whole months. But it is time to bid them farewell, except that they are frozen in place.

This is just like our habits, which we adopt at a younger age because they are pretty or funny or sassy. Then, as we become older, some of those habits just don't look so good on us anymore. Imagine if you were still as loud and self-conscious and self-loathing as a teenager! No thanks. But some of those old habits are frozen in place, and they show up at inconvenient times. They are one of the nubs around which our ego coagulates.

It's time to let go. But how? The thaw happens, not by kicking at that old frozen-in-place habit. Breathe. Relax. Release the wanting. It will return. Watch it return. Watch it leave again, maybe for just one second. Notice that.

I'm waiting for the frozen flowering kale to thaw.

Posted by Cheryl Wilfong at 8:18 AM