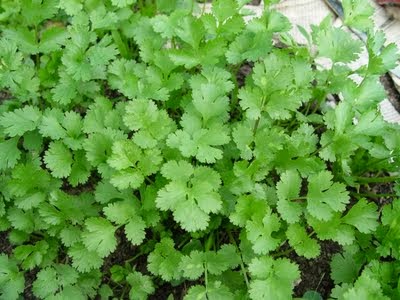 Cilantro (a.k.a. coriander) reseeds itself in the garden and is blooming now, so it's mostly gone before the salsa ingredients--tomatoes and cucumbers--ripen.

My neighbor Connie digs up cilantro roots and puts them in her freezer. They are a great addition to winter soups. Cilantro root is also a key ingredient in Thai curries. In the Republic of Georgia, stems of cilantro are served on a plate, along with chives and stems of parsley as a salad, but eaten by hand, like an appetizer.

Cilantro is one of those herbs that people either love or hate. I have several friends who can't stand the taste of it, and other friends who adore it. It doesn't matter to cilantro if someone hates it. Cilantro just keeps growing, doing its own thing.

How do we respond when we feel someone doesn't like us? Most likely, we close down and send the dislike right back to them. I have a few friends who are able to shrug being disliked off with "That's their problem." But, i, for one, take it personally.

The Buddha challenges us to practice loving-kindness in these sorts of situations.

The kindest thing i can do with cilantro is eat it.
Posted by Cheryl Wilfong at 7:41 AM