Making Peace with the Peace Lily 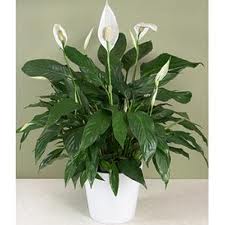 For several summers, i put my peace lily (Spathiphyllum) on the front step beside the front door. I thought their elegant white spathes would look nice in the transition between my white garden outdoors and the house indoors.

I finally realized that the peace lilies didn't bloom on the front step and their leaves were chewed by bugs. Instead of "nice," they looked rather ratty.


We often put ourselves in situations that we think should be nice, but instead we are riddled with doubts and anxieties. These worries and bothers should be our clue to remove ourselves from the situation. We don't necessarily have to tough it out. Let's make peace with ourselves first of all.

Now i leave my peace lilies indoors for the summer where they are blooming nicely.