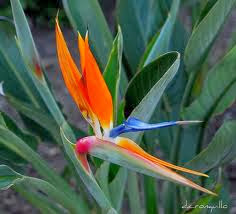 My bird-of-paradise is blooming its eye-popping orange and blue "birds." This particular tropical plant reminds me of my uncle who lived in Hawai'i and who died ten years ago today. He always sent the most spectacular tropical floral arrangements to funerals, although he made it a policy never to attend funerals himself, beginning with his own mother's funeral, when he was 34.

Four years before he died, i gave him the phone number of my mother's sister who was dying, and whom he had dated when they were teenagers. My mother was dying at the same time, and he felt very affectionate toward her, his ex-sister-in-law. He did not call her either.

None of us wants to carry on a conversation about death or look at death too closely. Yet the Buddha recommends that we contemplate death every day.

Death comes. Even in paradise.