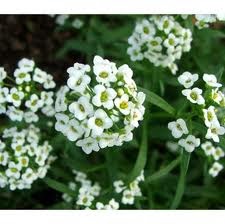 In April i buy 3 or 5 big packets of alyssum seed. Then i walk along the paths through the gardens and sprinkle. By June, the seeded ones have caught up with the ones that came from 6-packs. And now, in November, when all the other annuals have given up the ghost, alyssum still blooms.

Alyssum soldiers on through the dark and difficult times, and emits a light, bouncy joy with its soft tiny white flowers. By this time of the year, it has spread into a little community.

A 75-year-old once said to me, "Aging feels like a battlefield. I look around at my fallen comrades. I don't understand why i'm still standing."

Alyssum still stands on the ground while the battle of aging, illness, and death goes on all around her. 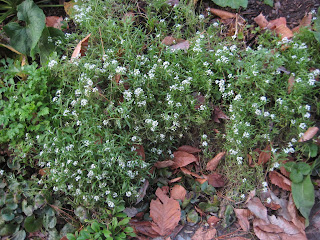 Posted by Cheryl Wilfong at 9:53 PM