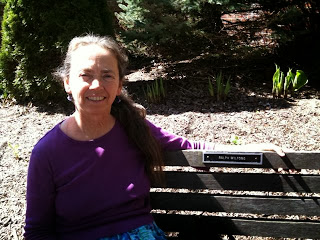 My dad died 16 years ago today, and there's a garden bench with his name on it in the tiny park in downtown Westfield, Indiana.

I don't think of my father as civic-minded exactly, yet there's that bench that he "bought" a couple of years before he died, when the town mothers were raising money for this then-new little downtown park. He was having coffee with his cronies at McDonald's, when someone approached him, and the men outbid each other in that friendly, small-town way.

I like to sit on that bench with my father's name on it during my annual visits to my brother nearby. I sit and remember my father and the way the town used to look. Everything has changed now. The name of the town remains the same, but it looks very different. The names of the streets remain the same, but Main Street and Union Street have been totally redesigned.

Change. Nothing stands still.
Posted by Cheryl Wilfong at 3:37 AM