I'm forcing hyacinths in vases. Right now, they're living in the basement where it's dark and cool. Usually, they start blooming in early February.

I've been collecting vases all year long. Every time i go to the thrift store or to the Swap Program at the landfill, i keep my eyes peeled for vases with narrow necks. Once or twice a month, i find an actual forcing vase.


Yes, it would be easier to just order a case of forcing vases, but also more expensive. I haven't found a supplier since my previous one dried up. Perhaps i could go to the florist and order a case through her. 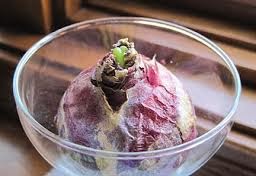 How much is enough? This week of Thanksgiving we give thanks for our plenty. Then some of us go out on Friday and shop for plenty more.

Enough. I have enough. My family has enough. A conversation with my 10-year-old grandson revealed that he doesn't really care about the stuff. He likes experiences--like rock-climbing camp or like shoveling manure out of Granny's truck. "Hey, I'm a farmer," he says. That's a feeling he won't forget, and that's enough for me.


Photo from maydreamsgarden.com
Posted by Cheryl Wilfong at 12:22 PM